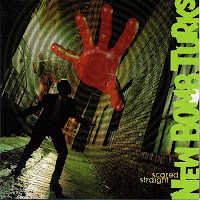 I do have a music dealer. His name is Max and he runs a shop in downtown Prague called Maximum Underground. He's a nice person who patiently bears with me occupying his headphones and talking nonsense most of the time. It's a pleasantly weird little place, so please support them by stopping by if in the area.

It is thanks to Max I am getting introduced to many records I wouldn't have a chance to be introduced to otherwise. This was exactly the case with New Bomb Turks.

Warning first: neither of their following two albums managed to impress me – one partially, another one at all. But Scared Straight is The Album. Lightning fast, sometimes feeling like being run in a fast forward by the overdriven guitars, it might slightly conceal however doesn't lose a melody for a single second, sparkling with bold vocal modulations here and there. Energy filler and spirit raiser, I find its track list composed at a relatively uniform and quite high level with my personal preferences peaking around the middle – somewhere from Jukebox Lean to Look Alive Jive.

The kicks you'd get from this LP are very different from the kicks packed into the albums I tried to describe so far. It's a pure call for action, a demand for it – someone kicking you in the back to set your bones in motion when you desperately need this but keep hesitating somehow. Scared Straight possesses the spirit of classical rock-n-roll inside the contemporary punk package. Not a proper goodnight record for sure.

Give it a try.


Wikipedia: Album|Artist
Posted by Denis Kozlov at 12:22 PM No comments: 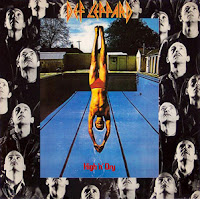 
Wikipedia: Album|Artist
Posted by Denis Kozlov at 3:49 PM No comments: 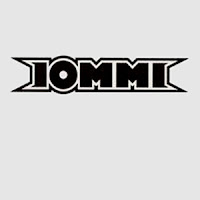 Posted by Denis Kozlov at 11:56 AM No comments:

It is easy to notice that a lot, if not most, of the albums gathered in THE LIST are quite pop in a sense that those might not be the subtlest and most extravagant or sometimes even not the most expressive works of a respective artist. Rather those are the records possessing the quality to appeal easily to a wider range of listeners – being more pop. And I think it's worth explaining my position here.

I do believe that “pop” in this meaning is not a bad thing at all. Of course, there are other meanings like being purely commercially driven for instance, which is a topic for a whole different conversation. But the ability of an artistic product to move the masses is a huge achievement, requiring a talent of a further level imho. And thus I put this ability among criteria to enter the list; among things valuable. You do not necessary devaluate yourself by being more understandable! On the contrary, communicating sophisticated ideas and subtle emotions in an accessible way is a solid mark of a real talent, potentially bordering with genius. Just like Shreks and onions, art can have layers – so put it there – as many layers of subtext as you wish or can, but make the front one strong, clear and appealing – at least to make it heard.

Just like Samsara – a movie called a triumph of cinematography for a reason. It says so much about so many things so deep, important, but overdiscussed till the loss of public interest or attention; and yet does it in a form so right for cinematography but so unusual to the most of us, that it would've been a sure failure if it wasn't so beautiful and so CLEAR. At least in its front layer.

So be deep, be good, be purple if you choose, but be popular.

1)I'm absolutely NOT saying EVERYTHING should be easy going. I'm a strong believer of diversity as a greater good. And we desperately need works harder to grasp as the only means possible to grow and evolve, to learn feeling and thinking deeper. It's just that as well I see a danger of refusing things pop only on the basis of its popularity – which has a strong scent of snobbery and decadence – intellectual elite's other best friends.

2)And of course not all the records I dare to recommend here are of that magic multi-layered kind – some are just what it says – a good rock record. ...Or I simply did not see through it – hopefully yet.

Posted by Denis Kozlov at 6:46 PM No comments: